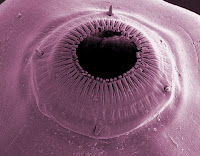 The scanning electron microscope has allowed us to see the awesome symmetry of some nematodes up close and personal. Equinurbia blakei is an intestinal parasite of African elephants and one of a group called “large strongyles.” This group is characterized by complicated mouthparts called the corona radiata (radial crown) seen here. The four structures outside the crown are called amphids and are sensory organs. Large strongyles are characteristic of ruminants and some hosts, such as zebras, can harbor up to 20 species and over a million total worms per animal.