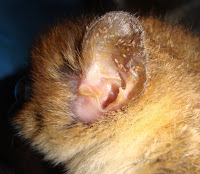 Lemurpediculus verruculosus is a species of louse that infects Microcebus rufus, commonly known as the Eastern Rufous Lemur or the Brown Mouse Lemur. L. verruculosus has a penchant for areas of its host where the skin is thin, the peripheral blood supply is good and where the animal cannot easily groom - thus the ears and, if it is on a male, the testes. This species was originally discovered back in 1951 as part of a collecting expedition by the famous medical entomologist Harry Hoogstraal, but the species description was based only on a single female that had been collected. Recent work on mouse lemurs yielded many more specimens of these lice, allowing the description to be expanded to include males and instar stages as well.

Photo contributed by Lance Durden, one of the authors of the new paper.
Posted by Susan Perkins at 6:00 AM