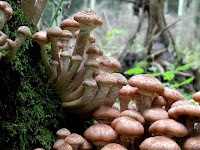 Yesterday, you met the smallest wasp known. Today meet one of the largest fungi known. Armillaria ostoyae is a species of parasitic fungus that is commonly known by the pleasant name of "Honey mushroom", but which causes the disease of both hardwood and coniferous trees called "Shoestring Rot." That latter name come from the appearance of rhizomorphs that the fungus can use to move between trees and infect them. Although relatives are edible and this fungus may be fine for most people to eat, others have experienced poisoning-type symptoms, thus you should probably avoid this one unless you really know what it is and that you are tolerant of it. This particular species is found in the Pacific Northwest and a few years ago, a colony of A. ostoyae in the Strawberry Mountains of Oregon was measured to be 2200 acres (8.9 square kilometers!) in size and was estimated to be over 2000 years old. That's one humongous fungus!
Photo from biopix.dk
Posted by Susan Perkins at 6:00 AM