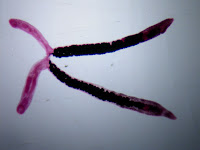 Although most digenetic trematodes (except for schistosomes) are hermaphroditic and thus, by definition, capable of self-fertilization, there is some evidence that cross-fertilization may be quite common and maybe even the norm. But it is unusual to catch trematodes in the act of fertilization. There is one exception - Tetracladium sternae is a trematode found in shorebirds such as terns and shearwaters and it is often found in copulating pairs.

Post and image by Mike Kinsella.
Posted by Susan Perkins at 6:00 AM