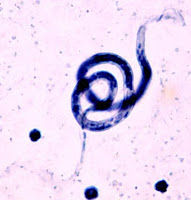 Like Wuchereria bancrofti, Brugia malayi is another type of filarial nematode that is responsible for the disease known as lymphatic filariasis or, as it is better known, elephantiasis. The name comes from the fact that the adults inhabit the lymphatic system and their presence induces intense swelling, such that the skin resembles that of a saggy elephants. This species is found in Southeast Asia, including Vietnam, China, India, and other neighboring countries. It's estimated to infect over 13 million people in this part of the world. Prevention and treatment strategies include vector control and drugs, some of which are being newly developed thanks to the availability of a complete genome sequence.
Posted by Susan Perkins at 6:00 AM