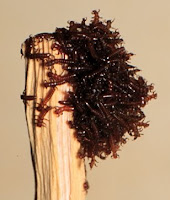 Today's parasite is the larval stage of the blister beetle Meloe franciscanus. The beetle larvae are brood parasites that feed on eggs and the young of the solitary bee Habropoda pallida. The problem is, how do they get into the nest of a female bee on the first place? Well they do it by imitating the real thing. They gather into a swarm and climb to the tip of a grass stem. Once there, they clump together to form a small brown blob. While it might not look like much to you, but beetles give off a smell and produce vibrations that fool a male bee into thinking that the blob is one fine hottie. For the beetle larvae, it's a collective effort - the more of them there are in the blob, the more attractive they appear to a male bee. As soon as the bee comes into range expecting to get lucky, all the beetle larvae jump onboard. The experience leaves the bee slightly shaken, but unstirred, and he continue on his quest to find a female bee. However, once he does find a real female, he also ends up passing on his sticky hitch-hikers as a sexually transmitted infection. Once the beetles are all onboard the poor female, they cling on for dear life, eventually disembarking at her nest where they will be surrounded by all the food they'll ever need to grow up.