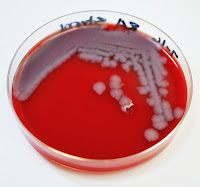 In the days and weeks after September 11, 2001, panic and suspicion seemed to be everywhere. After the terrorist attacks with airplanes, new threats in the form of letters sent to such famous people as newscaster Tom Brokaw and Senators Patrick Leahy and Tom Daschle were found to contain purified spores of Bacillus anthracis. B. anthracis is a Gram-positive bacterium that is usually found in the soil. When the spores of the bacteria are inhaled or ingested, they reproduce in the animal or human’s body, and can cause the disease anthrax, characterized by a multitude of health problems ranging from skin lesions (cutaneous anthrax) to gastrointestinal and pulmonary problems. B. anthracis is also notable as a parasite because it was the organism that the German microbiologist, Robert Koch used to formulate Koch’s postulates, the set of criteria that are necessary to define that an organism is the causative agent of a disease.

Image is from the CDC Public Health Image Library.
Posted by Susan Perkins at 12:59 PM