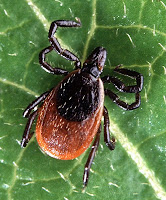 Ixodes scapularis, the blacklegged or deer tick, is a hard-bodied (ixodid) tick that is common across the eastern and Midwestern U.S. These ticks have become recognized as important vectors of several emerging diseases, most notably Lyme Disease, but also Babesia and Anaplasma. Like many other ticks (see Dermacentor variabilis, for example), the life cycle of I. scapularis involves three stages: a larva, a nymph, and an adult. Larval and nymphal I. scapularis often take their blood meals from deermice, but the adults favor larger mammals, particularly white-tailed deer. Humans (and domestic animals) can become infected when they are accidental hosts to nymphal or adult ticks that became infected when they acquired the bacterial or protozoan parasites from their first or second hosts.
Posted by Susan Perkins at 9:20 AM