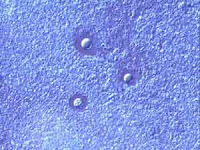 In the late 1980's and 1990's, a disease killing hard clams along the eastern seaboard popped up - particularly those in aquaculture environments. At first, it was unknown what it was and so was referred to simply as Quahog Parasite Unknown, or QPX. Eventually it was identified as a member of the phylum Labyrinthulomycota, a group of unicellular eukaryotes commonly known as "slime nets." Members of this group are common in the water column and in sediments, but it is not known if the disease is a novel one of shellfish or not. Scientists are studying more about the pathology of the parasite - but in most cases, the only sign of it is a large number of dead clams. It is not dangerous to humans, but it has caused severe economic impacts. An outbreak near New York in 2002 destroyed an estimated $4 million worth of clams.

Photo from Bassem Allam.
Posted by Susan Perkins at 8:43 AM