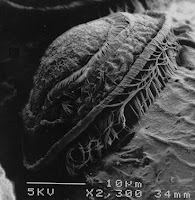 This is is an undescribed species of Trichodina sp. from the gills of Mugil cephalus in brackish waters around Brisbane, Australia. There are over 150 species in the genus Trichodina sp., making it one of the most species-rich parasite genera. They occur in fresh, brackish and salt water and are most prevalent when organic loads in the water are high. Al Dove did a good chunk of his doctoral thesis on trichodinids and he says, “Lets face it, they’re the prettiest parasites ever. I like this picture because it’s NOT the usual pretty silver nitrate denticle photo, and it shows off their “scrubbing bubbles” body shape, which gets lost when you dry them onto a slide. I also like that you can see bacterial rods adhering to the cell surface just near the cytostome, which faces away from the host, consistent with their commensal habits.”

Contributed by Al Dove.
Posted by Susan Perkins at 8:07 AM