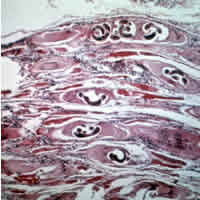 “I’ll have the pork chops, please.”
“Excellent choice, sir. How would you like those cooked?”
“Medium rare.”

You’ll never hear that dialog in a restaurant (I hope!) and Trichinella spiralis is one of the main reasons. The adults of these nematode worms live in the intestines of their host, and like many nematodes we’ve seen, the females lay larvae, derived from eggs that have already hatched inside her. But unlike so many other worms, the larvae don’t exit the host. Instead, they burrow through the host’s intestine and travel, via the blood system, to striated muscles. Inside the muscle, they encyst, transforming the host cell into a nurse cell (as seen in the photo). When the muscle is ingested by another animal, the larvae emerge, mature and take up residence in the intestine. T. spiralis can cycle repeatedly in pigs, that is if carnivory or scavenging occurs in them. It can also sometimes involve rodent hosts, such as the rats on a farm that cohabitate with pigs. And there are less-studied sylvatic cycles that can involve multiple carnivores and scavengers. Humans become infected when they eat undercooked pork and while the disease has become quite rare – at least in the U.S. – the symptoms are quite severe and the infection can result in death.
Posted by Susan Perkins at 7:12 AM