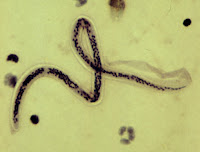 Wuchereria bancrofti is a nematode parasite found in Africa, South America, and tropical and sub- tropical countries in other locations. This worm uses two hosts: mosquitoes and humans. The microfilarias inhabit a mosquito until they grow into their motile larvae stage. They then move on to a human host; being transmitted during the blood meal of the mosquito. While in the human host they move to the lymph nodes over the course of a year where they then develop into the adult worm stage. Adult worms live 4-6 years in their host and produce millions of microfilaria which make their way into the circulatory system from the lymph nodes. This parasite can cause permanent damage to both the kidneys and the lymphatic system. Damage to the lymphatic system can cause a disease known as lymphatic filariasis in which the lymphatic system stops working properly and the lymph nodes become enlarged. It is estimated that 120 million people in 80 countries have suffered from filariasis. Untreated, this could lead to elephantiasis, a thickening of the skin and tissues which produces large growths on the body. Some drugs have been found that kill these parasites but only in their developmental stage. No current treatments have been found to eliminate adult parasites.

Contributed by Laura Rycek, Bucknell University.
Posted by Susan Perkins at 12:01 AM