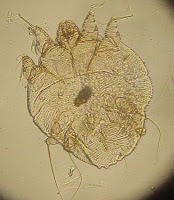 In the aftermath of the earthquake, aid workers report that scabies has been running rampant in tent cities in Haiti. Scabies is a contagious disease caused by Sarcoptes scabiei, parasitic mites that are hosted on humans, dogs, cats, and other wild animals such as koalas, gorillas, and wild boar. Sarcoptes scabiei are Acariformes, members of the subclass Arachnida (spiders, scorpions, mites and ticks), subphylum Cheliceriformes, phylum Arthropoda. Up to 104 species are known to have been infected with Sarcoptes scabiei, producing a condition called sarcoptic mange. All four stages of the parasite’s life, egg, larva, nymph and adult, take place on the host’s epidermis. The adult female burrows under the skin and lays 2 or 3 of her eggs each day. To enter the skin, the mites use cutting mouth parts and cutting hooks on the legs. As the life cycle progresses, the mites come to the surface of the skin, then burrow into molting patches to complete the stages. Burrowing mites feed on living cells and tissue fluid. The first hosts of S. scabiei are thought to have been humans. The mites then infected domestic animals that later transferred the parasite to wild animals. The movement of the mites into and on the skin produces an allergic reaction and is extremely itchy. On humans, scabies is most common in areas of the body that come in contact with the skin of other humans, such as the hands and arms. Scabies can be treated with prescribed medical cream.

Contributed by Sara Baughn, Bucknell University.
Posted by Susan Perkins at 7:34 AM