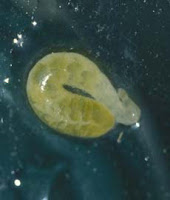 Today's parasite may be an example of a parasite turned predator over the course of evolution. Cystobranchus virginicus is a fish leech (Family Piscicoloidae), similar to a leech we saw earlier this year. Like other fish leeches, C. virginicus supposedly uses its long proboscis to feed on fish blood. However, this leech also has been documented to feed on fish eggs, an infrequently documented behavior (egg-feeding had only been observed in 5 or 6 other leech species). During a study examining fish mating systems, C. virginicus appeared in the redds (gravel nests where fish eggs are deposited) of at least four different fish species. Although not actually observed feeding on the fish eggs, these leeches were distended in shape and had the same translucent yellow color as the fish eggs when collected. Interestingly, no one has ever observed C. virginicus feeding on fish blood. It’s possible that the entire diet of this leech now consists solely of eggs, a potential concern if egg feeding results in high mortality and decreased fitness of the host fish species.

Contributed by Jessica Light.
See this paper for more info.
Posted by Susan Perkins at 6:00 AM

Email ThisBlogThis!Share to TwitterShare to FacebookShare to Pinterest
Labels: leech