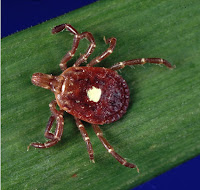 Yeeee haw! Today's parasite is the Lone Star Tick, Ambylomma americanum, though I must confess that although it is sometimes found in Texas, its name comes from the spot on the back of the females of the species. These ticks primarily feed on cattle or deer as adults. This species of tick is not thought to vector Lyme Disease, but they do transmit other parasites to humans, such as granulocytic ehrlichiosis (Ehrlichia ewingii), tularemia (Francisella tularensis), and a close relative of the Lyme disease bacterium, Borrelia lonestari, which produces Southern tick-associated rash illness (STARI). A. americanum also holds the distinction of being the first species of tick that was described from the United States - back before we were the United States - in 1754.
Posted by Susan Perkins at 6:00 AM

Email ThisBlogThis!Share to TwitterShare to FacebookShare to Pinterest
Labels: vector