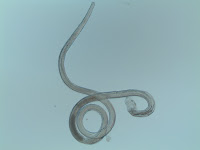 New World opossums are infected by a variety of parasites, including intestinal nematodes from the genus Travassostrongylus. Travassostrongylus encompasses 10 known species and is included in the richest superfamily of parasitic nematodes, Trichostrongyloidea. Using pointed ridges that run along their body, these worms constrict around microvilli in the walls of the intestine and feed on blood. The arrangement of the ridges aids in classification, as do the finger-like structures on the male copulatory bursa, which is a lobular tail that embraces the female during copulation. Species in the genus Travassostrongylus are found in Central and South American opossums. From the semi-aquatic marsupial Chironectes minimus, to the arboreal mouse opossum Marmosa, to the generalist Didelphis, this parasite infects a diverse group of mammals.

Contributed by Phil Scheibel.
Posted by Susan Perkins at 6:00 AM