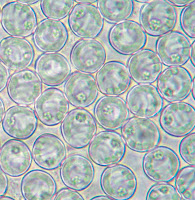 This year, a particular octopus named Paul achieved fame and stardom due to some of his famous shenanigans relating to the World Cup. However, even an invertebrate celebrity such as Paul is not without a parasitic nemesis. Aggregata octopiana is a species of single-celled parasite that infects the common octopus, forming cysts in various parts of the body including the gills, digestive tract, and epidermis. The details of the parasite's life-cycle are currently not clear, though it is known to be a two-host life-cycle involving alternating phases of sexual and asexual reproduction. The sexual phase of this parasite occurs within the octopus where it undergoes a series of differentiation and cell divisions to produce produce infective stages that are shed into the environment. The parasite then infects prawns or other crustaceans that act as the intermediate hosts where asexual phase occurs. The life-cycle starts anew when the infected crustacean is eaten by an octopus.