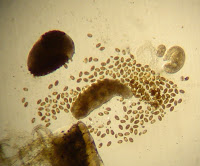 One of the problems of being a parasite with a complex life-cycle is the need to have all the appropriate hosts in the environment - the absence of any one of these hosts can mean a break in the chain, which spells doom for the continuation of the parasite's lineage. However, some parasites have evolved ways around that particular problem.

Coitocaecum parvum is a trematode found in New Zealand. Like most trematodes, it has a three host life-cycle, with amphipods (a kind of small crustacean) serving as a second intermediate host. Usually, in order for the parasite to complete its life-cycle and reach sexual maturity, the amphipod host needs to be eaten by the parasite's definitive host, a small freshwater fish call the common bully (Gobiomorphus cotidianus). However, in situations where the fish is absent, the parasite has another trick up its sleev...err, ventral sucker... Instead of waiting for a fish to come along (which might not happen before its short-lived crustacean host dies), it switches up its game - it becomes "progenetic" and reach sexual maturity within the amphipod itself. Because it is a hermaphrodite, it can simply fertilise its own eggs, which will be released into the environment when the amphipod dies and decompose.