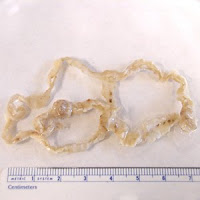 A common item in Jewish cuisine is gefilte fish, small boiled balls of minced fish meat. Unfortunately, though, the preparation of these little treats typically involved testing the gefilte fish as it cooked, meaning early tastes were of undercooked fish. That habit resulted in lots of Jewish grandmothers becoming infected with a tapeworm called Diphyllobothrium latum. Native to Scandanavia and eastern Russia, these parasites were brought to the U.S. with immigrants who settled in Minnesota, Wisconsin and other northern climes all the way to the Pacific Northwest states and the worms easily adapted to the ecosystem there, infecting native fishes. The life cycle is complex and can involve numerous hosts, beginning with copepods that ingest the eggs and then moving up the food chain to larger and larger fish until they are consumed by a person. Many people do not realize that they are infected as the symptoms may, in fact be mild, even though the tapeworms can be more than 10 meters (i.e. more than 30 feet!) long and pump out a million eggs a day. A common one is a severe vitamin B12 deficiency, however. There are two important components to stopping the spread of this parasite: refraining from defecating in lakes and freezing fish before consuming and cooking it properly. These parasites have likely been associated with humans for a very long time - evidence of these worms has been found in settlements along the coast of South America that may be as old as 10,000 years.

Read more about this parasite in Robert Desowitz's wonderful book, "New Guinea Tapeworms and Jewish Grandmothers".
Posted by Susan Perkins at 6:00 AM