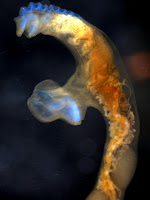 Digeneans are flatworms famous for their plastic morphology, that is, the flexibility expressed in their body plan; the variations-on-a-theme, if you will. There are few better examples than Odhnerium species, a genus of accacoeliid worms parasitic in the intestine of the ocean sunfish, Mola mola. Most digeneans have either 0, 1 or 2 suckers, with 2 being the overwhelmingly most common body plan: an oral and a ventral sucker. Then along comes Odhnerium, which lines the anterior dorsal surface with muscular pseudosuckers, in this case at least 9 (they show up as blue waves). What’s a pseudosucker? Good question! It turns out that suckers have a very specific definition: a capsule-bound muscular attachment organ that works by suction. In this case, the suckers are apparently not capsule-bound (i.e. there’s no connective tissue membrane around them) so they only look like suckers – hence “pseudosuckers”. Still, it’s a pretty crazy departure from the normal body plan for digeneans, and it’s hard not to wonder what they’re so important for, since tens of thousands of gut dwelling fluke species do just fine without them. And while we’re at it, check out the ventral sucker, which is up on a sort of stalk called a pedicel, and is more like a pair of muscular flaps forming a clamp, than a typical round sucker.

The blue appearance of the suckers in this particular photo is a trick of the light. The photo was taken during processing to make the specimen into a permanent wholemount. There’s a step in the process when the worm has had all its water replaced by ethanol, and then you gradually replace the ethanol with a clearing agent like eugenol or (in this case) methyl salicylate. As the met-sal penetrated and cleared the tissues, this handsome colour was created for a few seconds, and I snapped the pics because it looked cool.

Contributed by Al Dove.
Posted by Susan Perkins at 6:00 AM