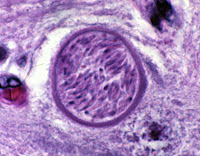 Originally confused with Toxoplasma gondii, Neospora caninum is a coccidian parasite that alternates between cattle hosts where it forms cysts in their tissues and canines such as dogs and coyotes, though transplacental transmission has been demonstrated in both intermediate and determinant hosts. Although this parasite does not seem to infect humans, it is of interest because it can cause spontaneous abortions in livestock if they are infected (resulting in economic losses perhaps as much as $24 million in Texas alone) and has also been linked to neurological disorders in dogs. The parasite is found virtually everywhere in the world where there are canines and cattle.

Photo of N. caninum in calf brain by Steve Upton.
Posted by Susan Perkins at 6:00 AM