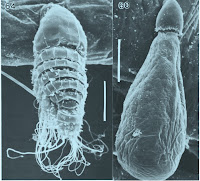 The parasite for today comes from a strange family of ectoparasitic crustaceans called Tantulocarida. There are only a few species within this family and they have a very peculiar development. They are parasitic on a number of deep sea crustaceans, and Microdajus langi itself infects small, shrimp-like crustaceans call tanaids.

Tantulocarids have a very strange life-cycle which is either asexual (which is more common) or sexual (relatively rare). In the asexual cycle, only females larvae are produced. Non-feeding larval stages known as tantulus are released from asexual females which resemble sacs and these larvae can directly attach and infect another host. On the left side of the accompanying photo is an immature female that had just attached onto the host, but once it is attached, it undergoes a strange transformation. On the right side of the photo, you can see a female that has just begun undergoing this development and she eventually develops into a bloated sac filled with eggs.

However, in the sexual cycle both males and females are produced and while males have never been observed alive, they have well-developed swimming legs and sensory organs which allow them to actively seek out and inseminate females. Once fertilised, the female attaches herself onto a crustacean host to start the cycle anew.