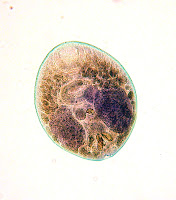 West of the Cascade Range in the Pacific Northwest, it is an extremely poor idea to feed fish scraps to your dog. This tiny intestinal fluke is the reason. The parasite itself is relatively harmless but it can act as a vector for a rickettsial illness caused by Neorickettsia helminthoeca (“helminth,” as we all should know by now, is Greek for “worm”). When a canid is infected by eating uncooked salmon, the rickettsia can cause symptoms such as vomiting, diarrhea, and dehydration, which can be fatal in as many as 90% of cases if untreated. For unknown reasons, cats, raccoons and bears are not susceptible to the illness.