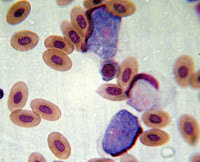 Leucocytozoon simondi is a blood parasite that is common in ducks and other waterfowl in the northern U.S. and Canada. These parasites, part of the same order of parasites as those that cause malaria in humans (Haemosporidia), are transmitted from duck to duck via the bites of blackflies. Their asexual replication occurs in the livers of the birds, followed by appearance of the transmission stages or gametocytes in the blood cells. Because of their large size, deep staining, and propensity to push the nucleus of the red blood cell way up against the cell membrane, these parasites were originally thought to infect white blood cells, not red ones. This species is happy to infect both wild and domestic hosts, but in the latter, they can actually kill the birds through liver damage and anemia.
Posted by Susan Perkins at 6:00 AM