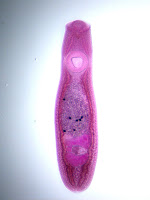 On the list of unpleasant places to have a worm infection, in one's mouth would have to be near the top. Flukes of the genus Clinostomum live in the mouth of aquatic birds, especially herons and egrets. The infective metacercariae of these flukes are found just under the skin or in the muscles of many species of freshwater fish, where they are known as “yellow grubs.” For photos of the grubs, see this site. Although cooking kills the parasites, eating a fish with an infection like this is easier said than done and many infected fish are discarded by fishermen.