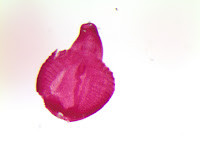 Aspidogaster conchicola is a trematode (Trematoda: Aspidogastrea) with a direct life cycle. Hosts include freshwater clams and snails (e.g., Viviparus species and Goniobasis livescens) and this particular one was found in Douglas Lake, Michigan, parasitizing a mussel belonging to the genus Ligumia. Hosts become infected when ingesting eggs of A. conchicola and adult worms can commonly be found in the mantle, pericardial, and renal cavities of their hosts. If parasite densities are high, A. conchicola may have negative consequences on host fitness. A. conchicola is the type species of the genus, and recently phylogenetic studies have found that A. conchicola is closely related to Lobatosoma species, resulting in a non-monophyletic Aspidogaster.