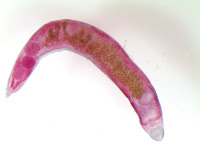 Brachylaima thompsoni is a digenean trematode (Family Panopistidae – previously Brachylaimidae) that parasitizes shrews in North America. Similar to other trematode species, B. thompsoni has a complex life cycle and it parasitizes two intermediate hosts before parasitizing its shrew definitive host. Both the first and second intermediates hosts of B. thompsoni are terrestrial gastropods. Documented first intermediate hosts include Agriolimax agrestis, Zonitoides arboreus, Deroceras leave, and Ventridens ligera (sporocysts of B. thompsoni are found in the digestive gland of the first intermediate host). Free-living cercariae then infest the second intermediate host (potential hosts include Neohelix albolabris and Webbhelix), where metacercariae develop in the pericardium or kidneys. Definitive hosts such as Short-tailed Shrews (Blarina brevicauda), Elliot’s Short-tailed Shrew (Blarina hylophaga), and Least Shrews (Cryptotis sp.) become infected when feeding on parasitized gastropods. B. thompsoni is commonly found in the large intestine of its definitive host and eggs of this tremaode are shed in the shrew fecal material. The first intermediate host becomes infected by ingesting the eggs, starting the cycle over.