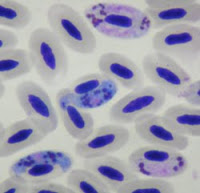 Lots of people are a little grossed out by pigeons, jokingly (?) calling them "flying rats". They'd probably be even more grossed out to know that many of those pigeons are hosts to a malaria-like blood parasite called Haemoproteus columbae. These parasites produce large kidney-shaped gametocytes in the red blood cells of doves and pigeons. These infected erythrocytes are ingested by hippoboscid flies (see this post for a similar species) that scamper through the feathers of the birds and feed on their blood for nourishment. H. columbae is the type species for its genus, which was for many years considered to be a large group of morphologically similar parasites that infected not just doves, but other birds, turtles and lizards as well. Molecular data have recently shown, though, that the forms in doves are a distinct lineage, not closely related to the others. This thus also corresponds to the vectors that are used as the parasites in other birds are transmitted by midges, not hippoboscids.

Photo by Jessi Waite.
Posted by Susan Perkins at 6:00 AM