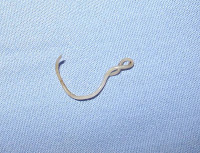 Toxocara canis is a roundworm (nematode) that occurs worldwide in dogs. In adults, they are generally asymptomatic, but they can be fatal to puppies, particularly if the infection is heavy. Transmission usually occurs via ingestion of the eggs, which are passed in feces. Once swallowed, the larvae hatch and embark on a scenic route - from the intestine to the liver and lungs via the blood stream, where they are coughed up, swallowed again, and eventually mature. Other hosts, including human pet-lovers, can become infected and that characteristic larval wandering can make those humans very sick themselves.
Posted by Susan Perkins at 6:00 AM