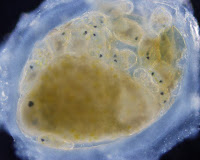 Yesterday you met a copepod that lives in the mantle of bivalves. Today, meet a turbellarian (a platyhelminth) that could be cozying up to those crustaceans. Urastoma cyprinae spends the majority of its life in the gills of bivalves, specifically mussels such as the gastronomically and thus economically important species Mytilus edulis, Mytilus galloprovincialis, and Crassostrea virginica. They live and feed and grow in the mussels, but their complete life cycle stumped researchers because eggs were never observed in these hosts. Researchers in Spain recently discovered that when U. cyprinae is ready to lay eggs, it leaves the bivalve, secretes a protective cocoon around itself and produces an egg sac. About 24 days later, the young hatch out (shown in the photo), make their way out of the coocoon and swim off to find new mussel hosts. The adults sometimes appear to just die in the cocoons, but sometimes also were observed to escape from it themselves and head off to lay more eggs.

Read more about these parasites here and here.

Photo by Celia Crespo González.
Posted by Susan Perkins at 6:00 AM

Email ThisBlogThis!Share to TwitterShare to FacebookShare to Pinterest
Labels: bivalve