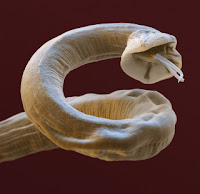 Angiostrongylus vasorum is commonly known as the "French heartworm", though unlike Dirofilaria immitis and D. ursis heartworms, this parasite is not a mosquito-borne filarial worm. Instead, this is a strongylid nematode, so like Strongyloides westeri. Both domestic and wild canids, especially foxes, are the vertebrate hosts for this parasite, but unlike the name suggests, the parasites are not purely confined to France, but are rather broad geographically. As you might guess, though, the adult worms reside in the host's heart. The eggs lodge themselves into lung capillaries and eventually the hatching larvae break through into the lung tissue where they get coughed up and swallowed, and passed out through the feces.

Image is from this site.
Posted by Susan Perkins at 6:00 AM