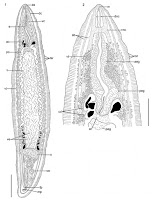 The next in our week of "All American" parasites is Cardicola nonamo, a bloodfluke, which is a species of digenetic trematode that infects the hearts of two species of seaperches - the white seaperch and the (I love this name) rubberlip seaperch - off the coast of California. Despite the fact that this species was only described this year, the type specimens were collected back in 1936 and 1980. Ash Bullard, the scientist from Auburn University, who published the paper, named the species after a conglomeration of the names of the three people who had first collected it: Nobel; Nahhas; and Moser.

Image comes from the original species description.
Posted by Susan Perkins at 6:00 AM