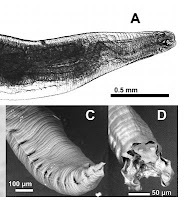 Anasakid nematodes in the genus Hysterothylacium are known to be quite diverse in fish worldwide, however just three species use North American freshwater fish as hosts and, until recently, none had ever been found infecting amphibians. H. burtti was recently found infected red-spotted newts (Notophthalmus viridescens) in Pennsylvania. The infected newts were found in ponds that did not contain any fish, thus it doesn't seem that they are just "spillover" or accidental hosts, but it is certainly possible that this species recently infected fish. Newts and fish such as sunfish consume many of the same prey items (which are intermediate hosts), so a host switch is certainly possible.
Posted by Susan Perkins at 6:00 AM