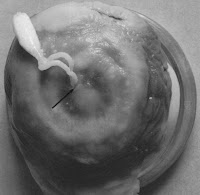 If you find the idea of having something lodged in your eye distressing (ok let's face it, who doesn't?), then today's parasite is probably your worst nightmare. Fortunately for you, it is not a human parasite. The hosts for today's parasite are Greenland sharks (Somniosus microcephalus) and Pacific sleeper sharks (Somniosus pacificus) - both large deep water sharks. Ommatokoita elongata is a parasitic copepod, approximately 5 cm in length (almost 2 inches) with a very specific and truly cringe-worthy preference about where it attaches on to the host.The adult female copepod attaches herself to the shark's eye with an anchoring structure call the bulba, and grazes on the surface of the cornea (see photo, black arrow indicates attachment point), hanging off the eyes of the shark like a grotesque tassle

There are two possible reasons for the copepod's attachment site. Shark skin is covered in microscopic, teeth-like structures call denticles which can make it difficult for parasites to attach themselves to skin (though some species of parasitic copepods
manage). Secondly the eye is considered to be a "immunologically benign environment" for parasites, thus such an attachment is less likely to illicit an immune response.

While the parasite can cause significant damage to the cornea and result in blindness for the host, most sharks seem unaffected by the presence of the parasite and many sharks have the copepod in both eyes, strangely enough. This goes to show when considering the virulence (harmfulness of a parasite to its host) of a parasite, it is worth taking into account the perspective of the host involved - what may seem debilitating to us may not necessarily be the case for the actual organism in question.