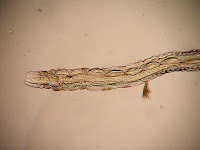 To a parasite, the vertebrate body is a vast array of habitats waiting to be invaded. And like other animals, most helminths have adapted to a specific niche and are only found in one organ or even one tissue within an organ. Nematodes of the genus Gongylonema live in sinuous tunnels in the wall of the anterior stomach and esophagus of birds and mammals and, when present in large numbers, can cause serious pathology. This spirurid genus is characterized by having wart-like growths on the cuticle of the anterior end. This species uses deer mice as its hosts.