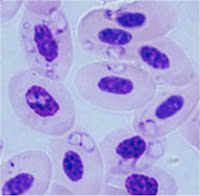 Recently, you met Babesia microti, an Apicomplexan parasite that is sometimes affectionately referred to as "Montauk malaria" because of it's presence in the Northeast and the fact that it causes a disease much like malaria in people who become infected via tick bites. Today's parasite is Babesia uriae, a species that infect birds - in this case, the murre, from California. Two birds were found to be infected after having been brought into wildlife rehabilitation centers. The parasites appear to cause pathology in these birds and based on both morphological differences and molecular data were determined to be a new species. This was the first time that a species of Babesia was found in the family Alcidae (the auks). Currently, the vectors are not known.

Photo by Michael Yabsley, one of the discoverers of this species.
Posted by Susan Perkins at 6:00 AM