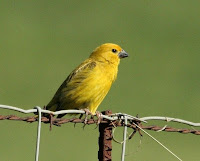 This pretty little African bird is commonly called the Cuckoo Finch or Parasitic Weaver and is a member of a family of African birds known as Viduidae, or the indigobirds or whydahs (now there's a good Scrabble word!). These birds are like cuckoos in that they lay their eggs in the nests of other birds and the hosts for Anomalospiza imberbis eggs are usually warblers. The females apparently remove any resident eggs before laying their own and then the little parasitic weavers convince their adoptive parents to feed them for several weeks before heading off to find a mate or join flocks of their own species.
Posted by Susan Perkins at 6:00 AM