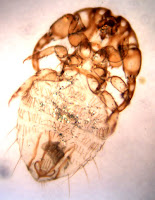 Pocket gophers are fossorial rodents belonging to the family Geomyidae. These New World rodents build complicated underground burrow systems, producing multiple mounds of excavated soil at the surface, and often wreaking havoc to agricultural crops and pastures. Pocket gopher individuals live in small, isolated populations generally living solitary lifestyles, with one gopher occupying a burrow system. All pocket gophers have external fur-lined cheek pouches that they use to carry food (hence the name “pocket”). Another thing that pocket gophers have in common is that they are parasitized by chewing lice (Phthiraptera: Ischnocera). Chewing lice are wingless insects and obligate and permanent ectoparasites; they cannot survive for long periods of time off their hosts. There are approximately 122 species and subspecies of these ectoparasitic chewing lice (belonging to the genera Geomydoecus and/or Thomomydoecus) and given the solitary lifestyle of their hosts in conjunction with their own limited dispersal abilities, gopher chewing lice are highly host specific. The close association between these wingless ectoparasites and their hosts has enabled the gopher-louse system to become a model system for studies of cospeciation. The pocket-gopher louse assemblage has been examined for almost 30 years using various types of data including distributional information, hosts associations, allozymes, and DNA sequences. Repeated statistical comparisons have shown that pocket gophers and their lice have been cospeciating over evolutionary time with lice often showing increased evolutionary rates. Current research includes additional examination of cospeciation at various taxonomic levels, and studies of parasite ecology, parasite transmission, and coadaptation enabling the gopher-louse assemblage to continues to be a model system in evolutionary biology. The species shown here is Geomydoecus coronadoi.

Post and photo contributed by Jessica Light.
Posted by Susan Perkins at 6:00 AM