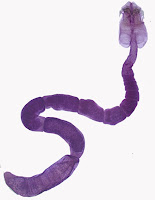 "What? Didn’t know sharks have tapeworms? Well they do! In fact, most species of sharks have their own unique tapeworm fauna that live in their gut and absorb nutrients through their tegument (their outer layer, like our skin). Tapeworms attach to their host with their anterior end, called a scolex (shown here in this Scanning Electron Micrograph), which, in this case, is modified with muscular sucker-like bothridia and hooks. This one here, Calliobothrium schneiderae, parasitizes the intestine of the spotted estuary smooth-hound shark from New Zealand. It is pretty tiny; it doesn’t get much longer than 4 mm (that’s shorter than a grain of rice!). Tapeworms are found in all classes of vertebrates, and there are estimated to be 1000s of tapeworm species just waiting to be discovered and described! So next time you see a shark, don’t think about it eating you--think about all the cool creatures that are living in its gut, enjoying a meal of their own! "

Contributed by Maria Pickering (who named this species after her high school biology teacher!)
Posted by Susan Perkins at 6:00 AM