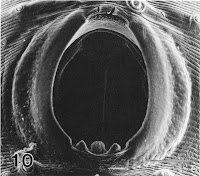 I have to admit that I included this parasite because I found this photo to be so striking. The image is of the sucker that the nematode, Aspidodera esperanzae, uses to attach itself to the intestine of its host. This species was discovered in armadillos in Paraguay in 1995 by a team of Japanese scientists who were part of a collaborative team sent to work on Chagas disease. The species is named after the consul of the Columbian embassy, however.
Posted by Susan Perkins at 6:00 AM