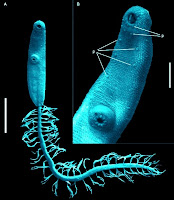 Colobomatus sillaginis is a parasitic copepod that lives in the head of two species of fish (commonly known in Australia as "whiting") in the genus Sillago (Sillago maculata and Sillago analis). This copepod dwells in the system of cephalic canals in the head of the fish. Interestingly, while the gut tracts of males and juvenile females are bright green, the gut of mature female copepods are usually coloured red or black. Living in the cephalic canal alongside C. sillaginis are small ciliates that are bright green due to the symbiotic algae living within them. These ciliates can be so numerous that some fish have a greenish tinge around front of the head. The male and juvenile female copepods graze upon this turf of abundant food. However, once they become mature, the female takes to feeding on blood, probably due to the physiological demand of egg production, rather like a female mosquito which normally feeds on nectar, but needs to obtain a blood meal for egg development.