Regular readers of this blog will no doubt be familiar with the wonderfully weird and twisted morphology of parasitic copepods. However, this is probably the weirdest we have featured yet. Herpyllobius vanhoeffeni is a spooky-looking parasitic copepod which has all the trappings you might associate with an Lovercraftian horror tale. They are found in the Antarctic Penninsula, in waters 666-673m deep, and they parasitise a polychaete worm, Eulagisca corrientis.

The top picture shows a pair of females attached to the ventral surface of their host; note that the lower individual has a pair of lobe-shaped egg sacs extending from its side like wings. The bottom picture shows a specimen that has been dissected from the host, showing the rest of the copepod, which is usually embedded in the host. Overall, the whole parasite looks not unlike a bulbous skull resting atop a twisted stalk of a body.

Speaking of co-extinctions, here's a contribution that I just got from Anya Gonchar. Columbicola extinctus is a louse that was specific to the Passenger Pigeon, the bird that forever disappeared in the early 20th century. In addition to many advantages of the narrow specialization, C. extinctus has experienced the most drastic of its drawbacks: it has followed its only host into extinction. This could have been one of the impressive examples for a discussion regarding specialist vs. generalist strategies in parasites, if the story hadn't suddenly taken a happy turn. C. extinctus was rediscovered from the Band-tailed Pigeon, while its fellow pseudo-extinct louse C. defectus was suggested to belong to a different species Campanulotes flavus that is still safe and sound. Still, parasite coextinction is documented in numerous other cases where we may not count on such good luck. Fortunately, there is now a large body of literature featuring related topics so that the problem is not neglected. The origin of this blog goes back to celebrating the year 2010 as an International Biodiversity Year. As the previous entries have shown, parasite diversity is enormous indeed. Yet, some parasite species’ existence is challenged. Further reading: Koh L. P. et al. 2004. Species coextinctions and the biodiversity crisis. Science 305, 1632. Dunn R. R. et al. 2009. The sixth mass coextinction: are most endangered species parasites and mutualists? Proc. R. Soc. B, 276, 3037-3045. Clayton D.H., Johnson K.P. 2003. Linking coevolutionary history to ecological process: doves and lice. Evolution, 57(10), 2335–2341. Johnson K.P. et al. 2003. When do parasites fail to speciate in response to host speciation? Syst. Biol. 52(1), 37–47. Johnson K.P. et al. 2009. Competition promotes the evolution of host eneralists in obligate parasites. Proc. R. Soc. B, 276, 3921–3926. Image is of Campanulotes flavus, from the paper: Price et al. 2000. Pigeon lice down under: taxonomy of Australian Campanulotes (Phthiraptera:Philopteridae), with a description of C. durdeni n. sp. Journal of Parasitology 86:948-950.
Posted by Susan Perkins at 11:20 AM No comments: 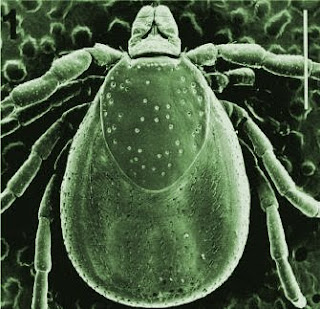 Today's parasite is a tick described from an endangered marsupial. Ixodes neuquenensis is an ectoparasite of a unique little marsupial known as monito del monte or "mountain monkey" (Dromiciops gliroides).

The "mountain monkey" is the only species still alive from an ancient lineage dating back more than 40 million years. Due to habitat loss, the population of this little marsupial has declined over recent years. This is bad news for I. neuquenensis because it is a very host-specific tick. If the "mountain monkey" goes extinct, it will also spell doom for this tick, along with a whole suite of other parasites and symbionts which are dependent upon this little marsupial.

Last year the most “yuck” votes were cast for a photo of Philophthalmus gralli in the eyes of a rhea at the Phoenix Zoo. Melanie Church, the vet who treated the rheas, gave me a back-door tour of the zoo in January. The three rheas are doing fine. She removed most of the flukes manually, treated the eyes with an anthelmintic ointment, and the birds are now virtually parasite-free. The rheas have been moved to a pen where the snail intermediate hosts are not present to prevent re-infection.

Contributed by Mike Kinsella.
Posted by Susan Perkins at 9:01 PM No comments: