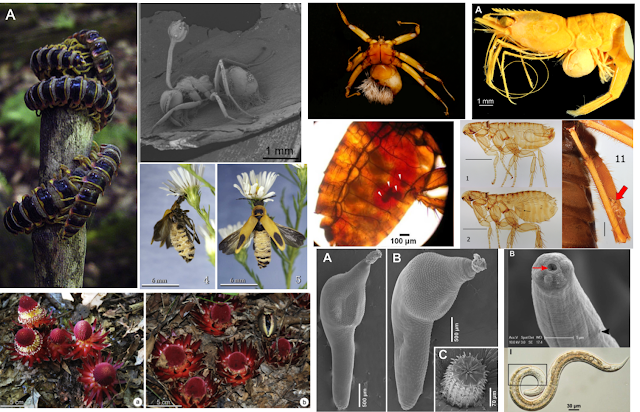 A few months ago, I wrote about a snail that forms galls in the spines of sea urchins, and while most people might not think of snails as parasites - let alone parasites that live on animals like sea urchins, sea stars, and sea cucumbers - the parasite-host relationship of snails and echinoderms actually goes back hundreds of millions of years. There are fossils of snail boreholes and galls on ancient echinoderms. In fact, they are probably one of the few examples of parasitism that leaves a clear trace in the fossil record. If a sea cucumber is to write a parasitology textbook, most of it would be devoted to snails.


Most of these parasites are from a family of snails call Eulimidae and the study that this blog post is covering was focused on a species call Megadenus atrae.  This parasitic snail has a few peculiar features when compared with the kind of snails that most people would be more familiar with. The shell is mostly wrapped up in a fleshy hood call the pseudopallium with only the tip visible, and it also has a giant sucker-like proboscis which it uses to cling to its host.

While other parasitic snails may simply attach to the skin or reside in the spines of their echinoderm hosts, this snails hangs out at a very specific spot - M. atrae lives in the cloaca of Holothuria atra - the black sea cucumber.

As strange as it may seem to us land-lubbers, the sea cucumber's butt is a popular hangout or gateway for many animals. There's the pearlfish which inserts its slim body into the sea cucumber through the echinoderm's cloaca and uses it as a kind of living shelter (some species also nibble on the sea cucumber's gonads while it is in there). There are also various crustaceans that are perfectly at home in a sea cucumber's butt. It is at this prime piece of real estate that M. atrae spends its adult life

In this study researchers collected black sea cucumbers from the chain of islands known as the Nansei Islands which stretches from the southern tip of Japan to the north eastern part of Taiwan, and recorded the presence of this parasitic snail. The snail is not particularly abundant, it was only found at two of the seven island sites they sampled from, and even on a reef flat at Kuroshima where they were most common, it was only found in one out of every ten sea cucumbers. Megadenus atrae has also been reported from other parts of the world including New Caledonia, India, and Australia. And in those other studies, the prevalence of this snail range from one in ten sea cucumbers to as few as one in a thousand.

Given that this parasitic snail is sparsely distributed in the sea cucumber population, this presents some challenges when it comes to reproduction - the likelihood of a larval snail encountering a host which is already occupied by another M. atrae is low enough, but the chance of that snail being of the compatible sex is even lower. Unlike other symbionts like pea crabs which can leave their host for a booty call, the only mobile stage of M. atrae is when it is a free-drifting immature larva. Once they are in a sea cucumber's butt, they are there for life

While it is possible that the snail can send out some kind of pheromone to recruit other M. atrae to settle in their host, how can they guarantee the new arrival would be of the suitable sex? After all there's no dating apps for snails living in a sea cucumber's butt.

Despite such obstacles, the researchers noticed that these snails were always found in pairs, and always as a female-male pair. They suggested that that this parasitic snail might have a sex determination system which is similar to that of the tongue-biter parasite and a range of other animals call protandry. With a protandric system, the larva starts out life as an immature male. If it settles down alone, it grows into a mature female snail. But if the snail larva happens to settle in a sea cucumber which is already occupied by a mature female, it will grow into a mature male. That way, M. atrae ensures that it will end up with a suitable reproductive partner no matter the circumstance.

So life finds a way, even for a parasitic snail trying to find a life partner amidst a sea of unlikely butts