If you don't like mosquito bites, then you will like today's parasite as it is a mermithid nematode which infects mosquitoes. We have previously featured worms from that family of nematodes - they all infect arthropods as larvae but have adults that live free in the environment. The larval worm develops inside the host's body and once it is fully mature, it exits its host by drilling a hole through the body wall, killing the host in the process (you can see this in action here).

Not only is Strelkovimermis spiculatus a scourge for mosquito larvae, it is also easily cultured in laboratories, and is not very picky about which species of mosquito it infects. So not surprisingly, S. spiculatus is also currently being considered as a biological control for mosquitoes. But how does S. spiculatus infect the mosquito in the first place? Mosquito larvae can live in just about any waterbodies, ranging from permanent ones such as lakes or dams, to more ephemeral bodies of water such as puddles or rainwater that collect in cavities such as car tires. Because mosquitoes can breed opportunistically in just about any pool of water, parasites that infect their larvae must also be prepared to be equally opportunistic and S. spiculatus has adaptations to do just that.

Firstly, the eggs of S. spiculatus are able to survive being dried out; this allows them to simply wait in empty ponds or puddles for them to fill up and become colonised by mosquito larvae. Secondly, even in more permanent water bodies S. spiculatus eggs can stay dormant in the environment for several months. The reason is that once the parasite larvae hatch, they have a very short window of 24-48 hours to find and infect a host before they die, therefore they have evolved to hatch only if suitable hosts are available. So what is it about the presence of mosquito larvae that trigger these dormant eggs into hatching at just the right moment?

By having hardy eggs that can survive being dried out, remain dormant for extended periods of time, and hatch only when presented with the right signals, S. spiculatus can simply lurk in the environment, ready to launch into action whenever mosquito larvae might appear. 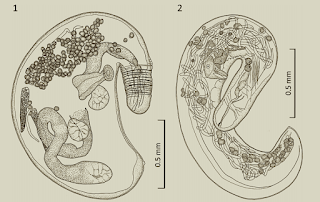