Six-legged, fur-covered, sea-faring and conferences - all packed full of parasites!

It looks like we've made it through another year of parasites, filled with posts on new research that was published this year on all manners of parasitic and infectious organisms. Among many other things, this year we covered some parasitological going-ons in the insect world with Zombee parasitoids, a story of parasitoid wasp, aphids and their symbionts, a wasp that can manipulate the colour of berries, and a cricket-infecting horsehair worm which has abandoned sex. 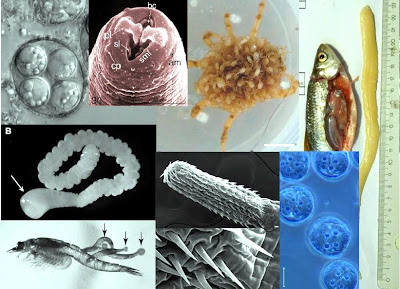 We also wrote about parasites that are infecting our furry friends including reindeer roundworms, a flea of desert rodents, echidna gut parasites, anteater parasites, and a caring, maternal bat tick.

There were a lot of parasite action under the sea too, with jellyfish parasites that provide a floating buffet for some fish, a thorny-head worm which infects krill as a way of getting itself into whales, a leech that lives on shrimps, a prickly worm that lives in the stomach of dolphins, and a story of death, sex and fish guts.

Those are just a few example of post from this year; browse through the archives for a lot more parasitological tales.

Also for the first time on this blog, Susan and I had decided to report from conferences that we had attended on our respective continents! I wrote up a series of blog posts from the Australian Society for Parasitology annual conference (Part 1, Part 2, Part 3, Part 4), and Susan also wrote a few posts reporting from the American Society of Parasitology annual meeting (Part 1, Part 2).

We will be back next year to bring you more posts about the latest development in fields relating to parasitology and just like this time last year, I have already lined up a few which I am going to be writing about... See you all next year!

P.S. If you can't wait until next year for your parasite fix, I was interviewed in a Google Hangout On Air as a part of DeSTEMber - in it I talked about parasites, science, and art. You can watch the interview "Living with Body-Snatchers" here.

Today, we are featuring the insect-killing fungus Metarhizium anisopliae. I have previously written about a related species that specialises on orthopterans (grasshoppers, locusts) and all species in the Metarhizium genus are dyed-in-the-wool insect killers - some of them are used as biological insecticides. There is even ongoing research looking into ways of loading them with scorpion venom to fight mosquitoes which spread malaria

Metarhizium anisopliae infects a variety of insects and in the study we are featuring today, the host they were presented with were termites. But M. anisopliae is not alone in their taste for these blind social insects. Termites can also fall victim to Aspergillus nomius - a fungus that usually lives as a saprophyte (feeding off dead things), but can sometimes be a parasite when the opportunity arises. Aspergillus nomius can grow very well by feasting on dead termites, but it has one problem; being an opportunistic "sometime" parasite, it is not very good at actually killing termites - in fact it is very bad at it.

In additional experiments where termites were exposed simultaneously to equal doses of spores from both fungi, they died at the same rate as those exposed to the equivalent dose of M. anisopilae sans A. nomius, showing that the M. anisopliae was the true killer and A. nomius did not contribute to bringing down the termites. But despite its role in mixed infection, the dedicated parasite M. anisopliae did not get to reap all the reward for its work in mixed company. Instead, it is out-competed by the opportunistic A. nomius, with termites cadaver killed by mixed infections sprouting more A. nomius.

This study illustrates the context-dependency nature of harm and competition. Ecological competition between parasites often involves trade-offs in a number of traits, and traits that allow a parasite to successfully overcome a host's defences do not necessarily makes it a good competitor when confronted with other parasites. In this particular case, the usually saprophytic A. nomius can't take down a healthy termites on its own, but given the chance through a true killer M. anisopliae, it'll step in and take over completely.

On this blog, we have covered many stories of either parasite cleverly evading the host's defences or the host valiantly fighting back against these bodily invaders. But sometimes, both parties lose out on this fight, and today we are looking at such a case.

Encarsia inaron is a tiny parasitic wasp no longer than 0.5 mm in length. It was introduced into North America in 1989 from Europe to control the ash whitefly (Siphoninus phillyreae) a sap-sucking insect which itself hails from Europe and the Mediterranean, and has become an established pest in North America and elsewhere in the world. Encarsia inaron lays its eggs in the nymphal (immature) stages of whiteflies. Like most parasitoids, the wasp larvae use the host's body as an incubator and a larder until they are ready to mature into adults, at which point they kill the host by bursting out of its body.

In addition to the ash whitefly, which it was introduced to control, E. inaron also infects a number of other whiteflies (as you will see below). For long-time readers of this blog, you might remember earlier in the year we featured a parasitic wasp that infects aphids and why picking the right-sized host is very important for the survival of its offspring. This also applies to E. inaron but in a different way. If the wasp infects a whitefly nymph that is too far along in its development, then the host would reach adulthood before the wasp larva can complete its development. And unlike other parasitoid wasps, E. incaron is incapable of delaying its host's developmental schedule.

Once the whitefly becomes an adult, rarely will the wasp ever emerge as an adult. While it may seem that in this case the whitefly has won simply by reaching maturity before its parasitoid, that is not exactly the case. Instead, it is a pyrrhic victory - the adult whitefly is still carrying the wasp larva inside it and this burden reduces the number of eggs that it can produce by more than half and significantly shortens its lifespan.

Considering the cost of infecting older nymphs (potentially never reaching reproductive maturity), you'd think this would provide an incentive (or to be more technically precise, evolutionary selection pressure) for E. inaron to avoid older whitefly nymphs - but that was not what the researchers found in the study we are featuring today. When they exposed female E. inaron wasps to two different whitefly species - the silverleaf whitefly (Bemisia tabaci) and the banded-winged whitefly (Trialeurodes abutiloneus), they displayed no particular preference for younger or older nymphs.

Keep in mind that this tiny wasp is a generalist that infects multiple species of whiteflies -  different species of whiteflies might impose different selection pressures upon the wasp population that prevents them from evolving an optimal approach to selecting the right host. In addition, older whiteflies are likely to be already parasitised by another wasp larva. If a newly arriving larva finds itself in an already occupied host, it can speed up its own development by exploiting the gains of the older, resident larva (a weakened host with an already suppressed immune system). A previous study has shown that when it comes to within-host competition, for E. inaron late-comers often wins.

So instead of being maladaptive, E. inaron that infect older whitefly nymphs may in fact be taking a bit of a gamble - a highly risky one, but one that comes with a potentially high pay-off.

Reference:
Brady, C.M. and White, J.A. (2012) Everyone's a loser: parasitism of late instar whiteflies by Encarsia inaron has negative consequences for both parasitoid and host. Annals of the Entomological Society of America 105:840-845.