Today's parasite is a strange worm found in a habitat that may shock and bewilder many readers on multiple levels. It's a worm that lives in the rectal gland of the spotted ratfish (Hydrolagus colliei). The spotted ratfish belongs to an enigmatic group known as the chimaera, an ancient group of cartilaginous fish that branched off from sharks almost 400 million years ago. The parasite itself is just as mysterious - it belongs to a group call Aspidogastrea (we have featured other species from this group on the blog before - Lobatostoma manteri and Aspidogaster conchicola), which made the evolutionary split with the far more diverse digenean trematodes probably also a few hundred million years ago (unfortunately, most parasites don't leave fossils). Rugogaster hydrolagi can grow up to 15 mm long (a bit over half an inch), and is so-called due its "rugae", which are the ridges on its body that give it a corrugated, accordion-like appearance. The life-cycle (like most aspecst of its ecology) is unknown, though like other aspidogastreans, it most likely features a mollusc intermediate host. 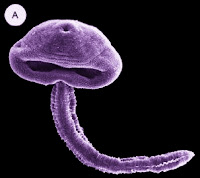