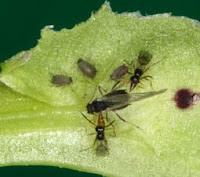 Recently there was a widely circulated study about fruit flies consuming alcohol to fight off parasitoid infections. But there are other methods that insects employ to fight off attacks by parasitoids, and the defence employed by aphids against one of its parasitoids - Lysiphlebus fabrum - is multi-layered in more ways than one.
From the parasitoid's perspective, bigger aphids provide more resources - but they are also more dangerous to tackle. Larger aphids can deliver a mean kick against parasitoid wasps, and they also have a more well-developed innate immune system, so even if the wasp can get past the kicking limbs, her eggs may not survive even if they do make their way in. Small aphids are much easier to attack and subdue and have weaker immune systems. But, because of their smaller size, they are also more likely to die from the trauma associated with being stabbed with a wasp's ovipositor, and this would end up being a waste of time and resources for L. fabarum. Therefore, much like Goldilocks, L. fabarum usually selects for the intermediate-size aphids - not so big that they put on too much of a fight, but not so small that they might not even survive the initial infection process.
However, there's another thread weaving through this story and that thread is coevolution. The effectiveness of the aphid's immune system depends on its genetic lineage. In typical co-evolutionary arms race fashion, there is considerable genetic variation in the aphid's innate immune system and certain aphid clones are better at fighting off parasitoids. But just when you are getting comfortable with the idea of aphid resistance being based on a combination of aphid age and genotype against the adversarial wasps, it's time to throw in another factor to complicate the story - the appropriately named bacterial symbiont Hamiltonella defensa.
Some (but not all) aphids carry this protective symbiont, which acts as an internal guard dog (guard germ?) that enhances the aphid's ability to kill off parasitoids. To complicate the picture further, H. defensa itself has acquired this ability by incorporating a toxin-producing gene into its genome that originated from a virus. Not only does this toxin-producing microbe kill off the parasitoid larvae inside the aphid, they also affect the egg-depositing behaviour of the parasitoid. And much like the aphid's innate immunity, age also plays a role in modulating the defense conferred by the symbiont. Younger aphids have smaller populations of H. defensa to start off, but they increase as they got older, and the more symbionts an aphid has, the better it is at fighting off parasitoids.
So how does this affect the evolutionary pathway of L. fabarum? Researchers found that because H. defensa play such a major role in the aphid's defense, not only are the wasps locked in a coevolutionary race with the aphids, they are also engaged in an even more intense arms race with the H. defensa symbionts carried by the said aphids. Even when H. defensa do not outright kill the L. fabarum larvae, they do still incur a cost; in aphids carrying the symbiont, the wasp took longer to develop, and also emerged slightly emaciated compared with those that infected H. defensa-free aphids.
The most remarkable finding that emerged was when researchers looked specifically at the different strains of symbionts and their interactions with different lines of L. fabrum. For example, they found that one particular strain of H. defensa that they called H323 conferred protection against most lines of L. fabarum - but offered the aphid no protection against one particular line of L. fabrum. Even the star performer out of all the symbionts - strain H76 - that conferred the greatest protection on average against almost all the lines of wasp tested - had a nemesis. A different genetic line of L. fabarum was able to weather the bacterial guardian's toxins and successfully develop to maturity.
What emerges is a complex series of coevolution that is occurring not just between different genetic lines of aphids and wasps, but also between the wasps and the symbionts carried by the aphids. While superficially, it may seem like the story of a coevolutionary arms race between aphids and wasps, given the strong interactions between the wasps and the bacterial symbionts, it is much more a story of coevolution between L. fabrum versus H. defensa, being played out on an "aphid stage."
Image from figure in the paper.
Reference:
Schmid, M., Sieber, R., Zimmermann, Y-S. and Vorburger, C. (2012) Development, specificity and sublethal effects of symbiont-conferred resistance to parasitoids in aphids. Functional Ecology 26: 207-215
Posted by Tommy Leung at 7:20 AM