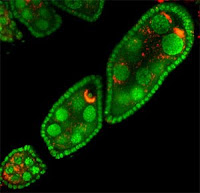 Talk about manipulative little buggers - Wolbachia pipientis are alpha proteobacteria that infect a very wide variety of insects and other arthropods. Like mitochondria, they are vertically inherited from mothers to offspring. But, they get very cranky if they don't get their way. In some cases, they kill off infected males, in some they feminize males, in some they allow females to reproduce parthenogenically, and then there are several documented cases of more complicated interactions in the form of cytoplasmic incompatibilities. Some are now investigating their potential use in biocontrol of malaria vectors and other insect pests, taking advantage of these manipulative tendencies.

Thanks to Mike Charleston for this nomination.
Posted by Susan Perkins at 9:09 AM