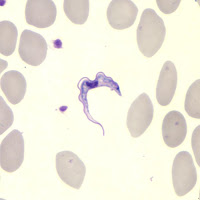 Trypanosoma brucei is the causative agent of sleeping sickness, a disease found in sub-Saharan Africa. Trypanosomes are flagellated unicellular eukaryotes that belong to the kinetoplastids, named for their distinctive organelles called kinetoplasts. T. brucei is vectored by tsetse flies (Glossina), but can also be spread by blood transfer. Trypanosomes are masters of immune evasion due to their ability to rapidly change their coats – their variable surface glycoprotein (VSG) coats, that is. By changing the proteins on the surface of their cells, they are able to thwart the antibodies of the specific immune system from recognizing them again. Sleeping sickness is a very serious disease which progresses from infection of the blood and lymph nodes (producing characteristic swollen lymph nodes known as Winterbottom’s sign), to eventually infecting other tissues including the nervous system. At this point, in addition to confusion and loss of coordination, the sleep cycle may be disrupted, giving the disease its name.
Posted by Susan Perkins at 8:00 AM