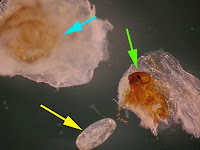 Tunga penetrans is a species of flea found in Central and South American and the Caribbean that has a similar life cycle to other fleas, such as Ctenocephalides felis, with one major exception. The females on T. penetrans are not content to hop onto a mammal, drink up some blood and move on - no, instead they move in. Commonly known as chigoe fleas (not to be confused with chiggers, which are larval mites), T. penetrans burrows headfirst into the skin, producing a lesion that is almost always on the foot and is extremely itchy and irritating. The lesion will have a black center, which are the two hindmost legs of the flea and her abdomen. After she feeds on blood from the epidermal capillaries, she will swell up like a little balloon and begin to pump eggs out when her host is walking on sandy soil. In this photo, you can see the familiar head of the flea, but her swollen abdomen has been damaged during the removal from the infected person. A large egg is visible, however.

Image is from the CDC Public Health Image Library.
Posted by Susan Perkins at 6:00 AM